Boosting is one of the most powerful ideas introduced in the last twenty years. It was originally designed for classification problems but can be extended to regression problems as well. It is a method where multiple models are created using a logic and then combined together to get a prediction which is better than what we could have got using a single strong model.

With respect to the idea of combining multiple models together it is similar to bagging but the way in which boosting comes up with multiple models is totally different from the way things are done in bagging.

To understand the concept of boosting intuitively, we will consider one of the earliest and important boosting algorithm called as “AdaBoost.M1” or “Discrete AdaBoost”. To understand this algorithm we set a context where our response variable has two classes . Note that by making a few changes, AdaBoost can be extended to a continuous response or a multiclass response as well but for now we will stick to the response.

Following is the pseudo code of AdaBoost.M1 algorithm. We will disect and look at each and every step in detail after that. 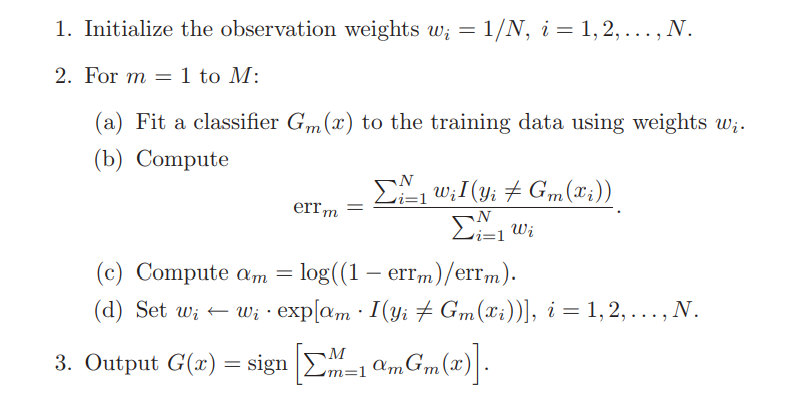 To simplify things a bit, the algorithm:

The above mechanism raises two important questions. Why are the weights assigned to the training examples? And What is the use of ??

The answers to these two questions are the key to understanding how and why boosting works.

1. Why assign weights to training examples?

To illustrate why this weight updation works: Once is fit, we will have which will update the weights for accordingly. Now consider the fitting of the next tree . We know that decision tree algorithms choose that feature and that value of the feature which minimizes the error at each split. Our error function is . Note the indicator variable . Since we have this indicator in the error function, we can see that the decision tree will try to pick the features for the splits which correctly classify the highly weighted observations (misclassified by the previous tree) since if these observations were misclassified again then the indicator variable will take the value of and the high weight will be considered in the evaluation of error. So the decision tree will be forced to prioritize the previously misclassified examples because if it does not, then the weighted error would cease to come down and converge to a minima. Its like manipulating an algorithm to focus on previous misclassified/ highly weighted examples by including the weights in the loss function. This is why weights are assigned to each training example and are accomodated in the error.

So higher the weight of a particular training sample, more the chance of the algorithm finding the right criteria to correctly classify it.

Error of is high

This means is high. Lets assume error is 0.9. Then

As we can see turned out to be low. is inversely proportional to

Weights of Examples correctly-classified by

For rightly classified examples, the indicator variable is zero. This implies the exponent term in the weight updation becomes 1 (). This implies updated weight i.e. no change.

Weights of Examples mis-classified by

For mis-classified examples, the indicator variable is 1. This implies the exponent term in the weight updation becomes . And therefore,

This is how the combination Error, Alpha and Weights is used to create iteratively better learners.

Error of is low

This means is low. Lets assume error is 0.1. Then

As we can see turned out to be high. is inversely proportional to

Weights of Examples correctly-classified by

For rightly classified examples, the indicator variable is zero. This implies the exponent term in the weight updation becomes 1 (). This implies updated weight i.e. no change.

Weights of Examples mis-classified by

For mis-classified examples, the indicator variable is 1. This implies the exponent term in the weight updation becomes . And therefore,

So this is how the Boosting works in essence. Examples are weighted according to their correct classification and weights are updated at each iteration.

You May Also Enjoy

Tensorflow: What, Why and Where?